Why our blood group matters in transfusions, pregnancy and COVID infection

Donated blood is a vital resource, both for elective treatments and urgent interventions. It can help patients suffering from life-threatening conditions. A transfusion of whole blood or plasma is employed in invasive surgeries and traumatic injuries involving significant blood loss occurring in natural disasters, accidents, and armed conflicts.
The blood donated has a limited lifespan up to 42 days, thus requiring frequent donations to replenish a blood bank. Around 1 in 13 000 blood units are administered to the wrong patient with occasional fatal outcomes. Prior to the transfer, the blood of a potential donor is tested for its group type (A, B, 0 system), Rh factor, presence of blood-borne infections such as HIV, CMV, hepatitis B and C. There is never enough blood to satisfy the demand for transfusion. On 14 June, we celebrated World Blood Donor Day. This day is dedicated to raising awareness of the need for safe blood and blood products and to expressing gratitude to donors for their life-saving gifts.

Donated blood is a vital resource, both for elective treatments and urgent interventions. It can help patients suffering from life-threatening conditions (cancer, anaemia, iron deficiency, bleeding disorders and pregnancy/childbirth). A transfusion of whole blood or plasma (blood removed of the cellular components) is employed in invasive surgeries and traumatic injuries involving significant blood loss occurring in natural disasters, accidents, and armed conflicts.

The blood donated has a limited lifespan up to 42 days, thus requiring frequent donations to replenish a blood bank. 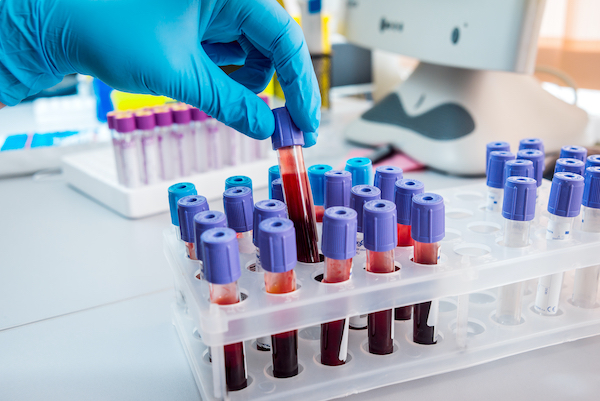 There are rare risks associated with blood transfusion. Data from the UK Serious Hazards of Transfusion initiative show that around 1 in 13 000 blood units are administered to the wrong patient with occasional fatal outcomes. Prior to the transfer, the blood of a potential donor is tested for its group type (A, B, 0 system), Rh factor, presence of blood-borne infections such as HIV, CMV, hepatitis B and C. With an incompatible blood type, the host or recipient may develop an acute or delayed haemolytic reaction or graft versus host disease in which the transfused white immune cells attack the recipient’s bone marrow, which is usually fatal especially in patients with leukaemia.

The discovery of the ABO blood groups
The characterisation of blood types is credited to Karl Landsteiner who was a physician and a prolific researcher from Austria. Born in 1868 in Vienna, he made numerous discoveries to both pathological anatomy and immunology, providing a vast contribution to our current biological understanding. But he is predominantly renowned for the discovery in 1901 of blood groups, for which he was awarded the Nobel Prize for Physiology or Medicine in 1930. This fundamental discovery came from the observation that when someone received a blood transfusion from an animal or another person, this would cause aggregation of blood cells, release of haemoglobin and manifestation of symptoms including shock, jaundice, and haemoglobinuria. These findings had not received much attention until 1909 when Landsteiner presented the currently used blood grouping into A, B, AB, and 0 system. In his studies, he demonstrated that transfusions between people of the same group did not cause the destruction of blood cells, which only occurred in recipients of blood from a different type. 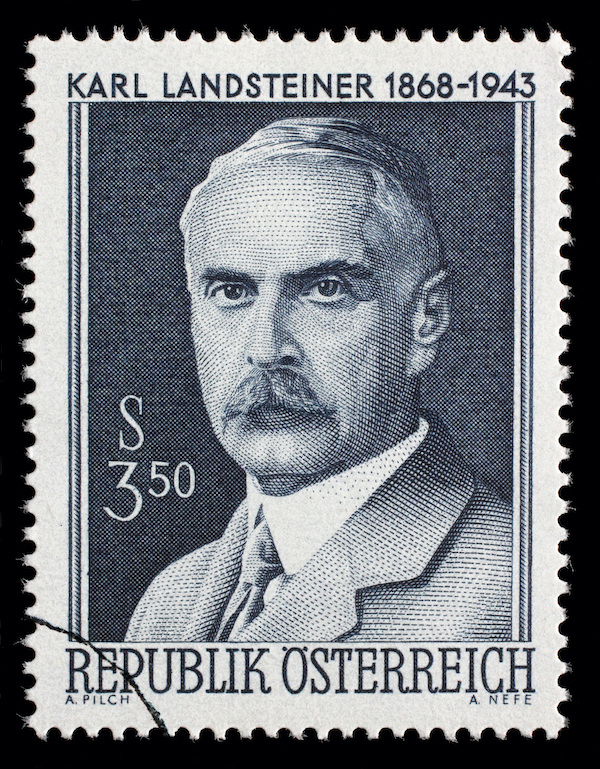 The Rhesus factor
In addition to the major blood groups, Landsteiner established the importance of the Rh or rhesus factor, which relates to the similarity of this factor in rhesus monkeys. This research stemmed from the evidence of bleeding in newborns. The Rh factor is a protein found on the surface of red blood cells and is inherited from one of our parents. People who have it are Rh positive, and those who do not have it are Rh negative. Most people are Rh positive. Therefore, prior to a blood transfusion, it is critical to consider not only the A, B, AB, O, blood type but also the expression of the Rh factor. With the ongoing research since its discovery, there are meanwhile 49 known Rh antigens, making our blood characterisation more complex. Determining the Rh group is routinely performed on blood donors, transfusion recipients, and in mothers-to-be.

Knowing blood type before a transfusion
The incompatibility regarding the ABO blood group as well as the Rh factor presents a huge risk during blood transfusions. Because the Rh antigens are highly immunogenic, the Rh antibodies are considered as potential causes of haemolytic transfusion reactions. Routine blood typing in blood donors and transfusion recipients has reduced the incidence of detrimental consequences, but other Rh factors of the large group may still cause reactions for example in patients with sickle cell anaemia.

Compensation claims for tainted blood transfusions
In the 1970s and 1980s, routine blood testing was not at the same level practised today and hepatitis C test was not available. As a result a thousand patients with haemophilia, a blood clotting disorder for which patients require occasional blood transfusions, have contracted blood-borne diseases. In particular hepatitis C, which in some patients develops into liver cirrhosis and cancer. Following a UK inquiry, documents released in 2019 showed that health departments admitted responsibility for thousands of haemophiliacs becoming infected with HIV and hepatitis C because of imported American blood, but successive UK governments have denied any wrong-doing.

Health figures indicate that in Australia by 1992 nearly 20 per cent of 1,570 haemophiliacs were diagnosed with HIV and 55 people had already died despite Australia not importing blood products from the US. In 2010, the Health Department said that state and territory governments were responsible for administering compensation to people who had acquired hepatitis C through the blood supply between 1991 and that Federal Government would provide $1.4 million over four years to contribute to compensations state efforts. However, compensation is still awaited by tainted blood victims. 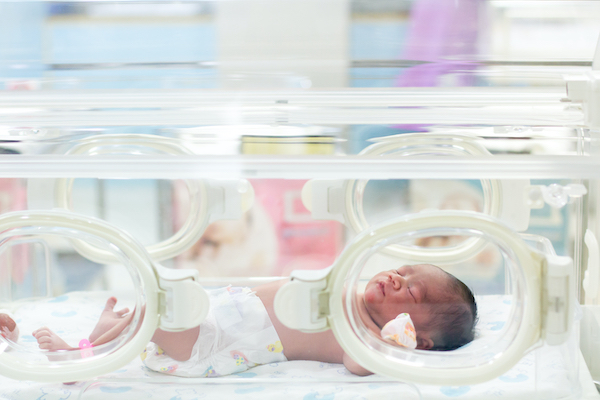 The role of the Rh factor during pregnancy
A problem in blood compatibility can arise during pregnancy when the mother is Rh negative and the baby is Rh positive as the mother may develop antibodies against the baby’s Rh factor despite the little exposure to the baby’s blood. When this happens, the Rh antibodies may cross the placenta and cause the rupture of the baby’s erythrocytes leading to life-threatening anaemia and even death in a condition named haemolytic disease of the newborn. Therefore, if a mother is Rh negative, it is recommended that she undergoes an antibody test to see whether she has developed anti-Rh factor antibodies that could be detrimental to the foetus. In order to avoid complications, the mother is given a kind of vaccine, or anti-Rh antibodies (immunoglobulins, also named anti-D due to the D-antigen present on the Rh factor) at week 28 and 34 of pregnancy and again within a few hours from having given birth to a Rh positive baby. These antibodies destroy any Rh positive blood cells, which have been transferred from the baby, thus preventing her from producing antibodies that might compromise future pregnancies. Unfortunately, this intervention is not effective in all cases. 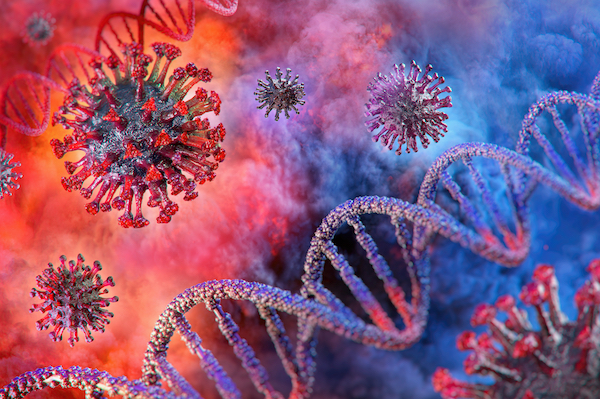 This study corroborates the results of similar research by others. In a European study from Norway, Spain, Italy, and Germany, 1,980 COVID-19 patients with respiratory failure were recruited to determine the genetic factors linked to COVID-19. The association with severe symptoms was found to differ in blood types and also with the genes that regulate the expression of the ACE receptors, known to allow the penetration of the virus into the cells. As to the blood group analysis, they showed that blood group A positive participants had a 45% increase in respiratory failure, while patients with blood group O were at a 35% decreased risk for respiratory failure.

Please notice that these studies have been published prior to a rigorous peer review, a process that guarantees the quality of the research.