In Australia, and across the world, the presence of a therapy dog in medicine is becoming mainstream. In fact, the concept of pet therapy is thriving across health, mental health and the educational sector. Meanwhile, therapy dogs have been introduced also in the legal profession.
Lex Medicus has embraced this trend and has become the first medico-legal company in Australia to offer a certified therapy dog. You may have seen in our recent social media posts, that Lex Medicus has introduced our therapy dog, Layla. Layla is available upon request to support examinees during the consultation in our South Yarra office. In Australia, and across the world, the presence of a therapy dog in medicine is becoming mainstream. In fact, the concept of pet therapy is thriving across health, mental health and the educational sector. Meanwhile, therapy dogs have been introduced also in the legal profession.
Lex Medicus has embraced this trend and has become the first medico-legal company in Australia to offer a certified therapy dog. You may have seen in our recent social media posts, that Lex Medicus has introduced our therapy dog, Layla. Layla is available upon request to support examinees during the consultation in our South Yarra office.

Layla’s story is almost out of a fairy tale
Layla is a German Shepherd crossed with a husky, the latter responsible for her lavish tail. Thomas picked her out of a litter of 10 from a farm in Mildura not really knowing what to expect. Being his wife and a cat lover, I was sceptical, as I never had a dog before. In the end, in between operations, Thomas decided to make her part of our family. When Layla arrived in Melbourne after a six-hour drive, everyone fell in love with the tipsy little dog, but as I predicted, she grew bigger and bigger…… not with the enjoyment of my old cat.

Initially, Layla became our Lex Medicus office dog, trotting around the rooms of our staff to bring joy and smiles (and a few stolen snacks). Her introduction into the medico-legal field began when our staff realised that examinees who felt anxious and insecure prior to the medico-legal examination immediately relaxed at the sight of Layla. To make patients at ease, Thomas then started to ask them: do you like dogs? And in most cases, they were indeed dog lovers. When Layla was introduced to the patients in the rooms, he could feel the difference in their emotion and facial expressions. The patients immediately relaxed and enjoyed the experience of Layla’s caring touch. 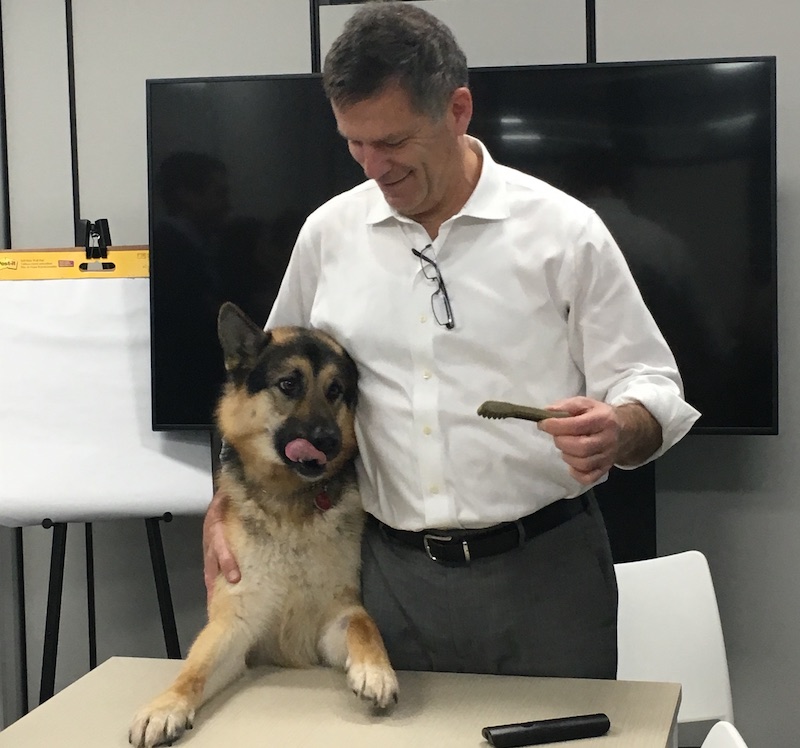 Because of Layla’s sensitive nature, Thomas thought to provide structure to her natural instinct of comforting people. Last January, both Layla and Thomas went through an extensive therapy dog course to formalise her role. As a result, Layla is now a certified visiting therapy dog and Thomas her certified handler.

The value of Layla’ s presence in our office
Patients arriving at Lex Medicus may suffer from anxiety or have sustained multiple injuries, or be facing personal issues of social nature, unemployment or require the assistance of a translator. These circumstances can be intimidating and frightening for a client. Layla’s positive impact on these examinees has been unquestioned and we hope more clients will take advantage of this opportunity. And best of all, it is complimentary!

What training has Layla received?
Layla was trained together with Thomas at Lead the way Institute an organisation based in Victoria which was established in 2003 by a psychologist and professional dog trainer Melanie Jones, making it the first-ever Therapy Dog training course in the country. Ms Jones is also a researcher working on her PhD at the University of Melbourne to explore the role of dogs and horses in people undergoing psychology treatment.
Layla and Thomas spent 8 hours a day for a week undergoing the course. In this rigorous training, Layla had to give up the chase for treats and chickens and pass two practical exams at a children’s karate club lesson as well as at an aged care home. They both passed the tests with Thomas becoming a certified therapy dog trainer and Layla an official therapy dog.

Let’s have a look at what the research says about the role of therapy dogs in health care settings.

What are therapy dogs?
Therapy dogs are not service dogs. A service dog is an assistance dog that focuses on one owner only and is trained to provide specific support for this individual with disabilities such as visual or hearing difficulties, seizure disorders, mobility challenges, and/or diabetes.
Conversely, the role of therapy dogs is to respond to many people and their environment, under the guidance of their trainer. The concept of a therapy dog is attributed to Elaine Smith, an American nurse who worked in England. She noticed how well patients responded to visits by a priest in the company of his golden retriever. After her return to the United States in 1976, Smith started a program for training dogs to visit institutions. 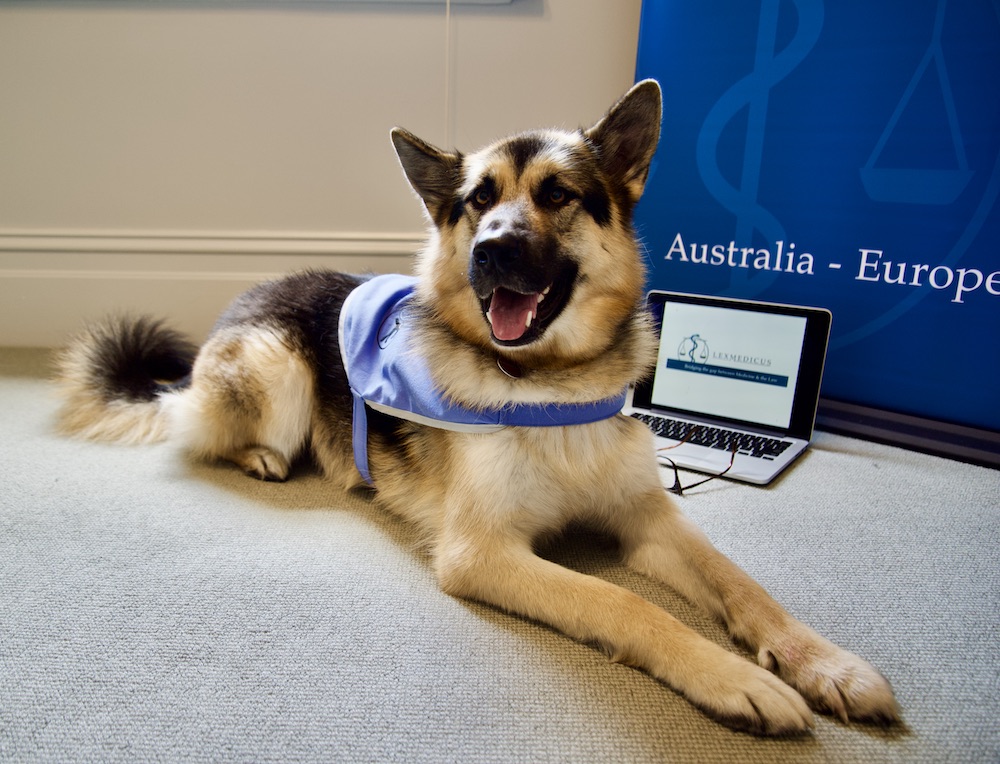 What is pet therapy?
It comprises both animal-assisted therapy and animal-assisted activities. Whereby therapy relies on the inclusion of pets, mostly dogs, to help people to recover after an illness. Animal-assisted activities instead focus on providing comfort and ease for example in nursing homes.
The Mayo Clinic in the US offers pet therapy to patients admitted to the hospital. The doctors are able to organise the presence of a dog during the therapy sessions under the guidance of the trainer. This service is offered to children, cancer patients, or people with long term care and cardiovascular diseases, dementia, PTSD and anxiety.

The physiological benefits of a therapy dog
There are well-known benefits of introducing a therapy dog in a health care environment. A review of 69 published studies showed the evident improvement that human-animal interaction (HAI) has on social attention and behaviour, interpersonal relationships, and mood. HAI can positively alter the parameters related to stress such as cortisol, heart rate and blood pressure. The comparison of 18 healthy adults exposed to either a relaxed reading session or a dog interaction, indicated that blood pressure was significantly reduced after the dog visit after only 5–24 min (average time=15 min). Interestingly, not only for the people, but also for the therapy dogs, the levels of endorphin, oxytocin, prolactin, and dopamine were improved, thus showing a reciprocal benefit for both the person and the animal.

The experience with a therapy dog affects also psychological symptoms, including the reduction of anxiety reflected by the diminished levels of epinephrine and norepinephrine, boosting the immune system and even reducing the perception of pain. All of these benefits have been linked to the increase of oxytocin, a natural hormone produced with an intimate bond to a person or a pet, which even occurs between a mother and a newborn or between people in a loving relationship. Studies have also shown higher levels of endorphins following the interaction of a person with an animal, providing a good feeling and even the reduction in pain sensation.

Dogs in particular have the ability to empathise with the patients. This characteristic is possibly guided by mirror neuron activity, which helps identify and comprehend other people’s feelings and read their emotions. In certain conditions, dogs have manifested an extraordinarily high sensitivity in detecting diseases even before the patient realises. In seizure for instance, therapy dogs can sense the upcoming epileptic fit, or in diabetes the occurrence of a hypoglycaemic event before the patient becomes symptomatic.

Therapy and facility dogs in the courts
In Australia, therapy dogs have been already been included in court trials. Assistance dogs are permitted in the courts for example in support of people with disabilities. In addition, facility dogs can assist witnesses of crime victims. The Canine Court Companion Program is a community-based initiative by Guide Dogs NSW/ACT in partnership with the NSW Government, Department of Justice (Victim Services). They write: “In a courthouse environment, emotions and stress are often at a high and victims of crime are at risk of being re-traumatised and left feeling vulnerable. Interacting with a Therapy Dog may reduce these feelings and improve the person’s wellbeing”. However, despite the acceptance by the NSW courts, the ACT government spokesman stated: Decisions about animals in an individual case are a matter for the courts and should be made independently by the judge or magistrate,” the spokesman said. 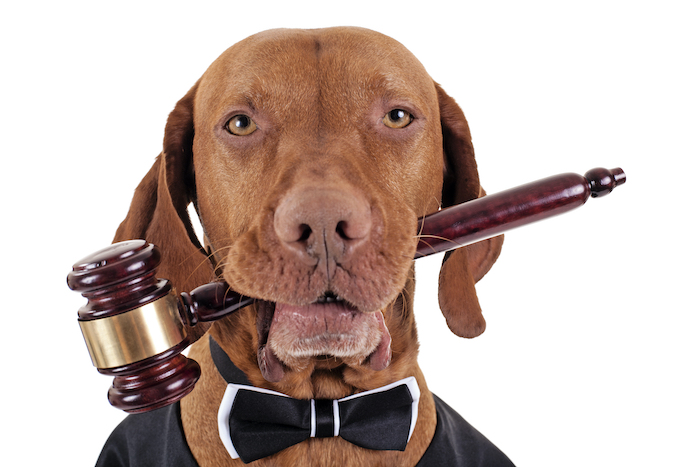 The use of dogs is popular in the US for witnesses in criminal proceedings. They are called facility dogs and attend during testimony at trial in various court settings. Facility dogs are particularly useful for children and other vulnerable witnesses such as victims of domestic violence. Of the six state statutes that refer to the use of facility dogs, two (Illinois and Hawaii) require that the dog be trained by a member organisation of Assistance Dogs International (ADI). Or alternatively as for Arizona, that a facility dog is trained by “an assistance dog organisation or entity whose main purpose concerns training, placement, and use of assistance dogs, staff and volunteer education.”

If you wish to read about court cases where dogs have been present during trials in the US follow this link.

In concluding, the benefits of therapy dogs are multifaceted. Although at Lex Medicus we are not able to measure an actual improvement of patients’ wellbeing, we certainly know from the survey post-consultation that the presence of Layla was the highlight of their experience.  If you wish you can now follow Layla on Instagram. 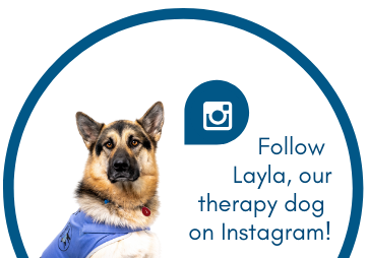 Briefing an expert in the digital age