Silicosis – a new epidemic of an old occupational lung disease?

Silicosis is caused by the inhalation of crystalline silicon dioxide (silica) and, it is fair to say, that over the years the prevalence of silicosis in Australia has been low as a result of the use of appropriate occupational health and safety measures. However, in the early 2000s silica containing artificial stones became available in Australia and are becoming increasing popular in the manufacture of kitchen and bathroom bench tops. Silicosis is an occupational lung disease with original descriptions by Agricola in 1556 and, later, by Ramazzini in 1713. Initially recognised as causing lung disease in stonecutters and miners, it has been recognised, in more recent times, as afflicting sandblasters, tunnellers, quarry workers, stonemasons, foundry workers and by potters and workers in the ceramics industry.

Silicosis is caused by the inhalation of crystalline silicon dioxide (silica) and, it is fair to say, that over the years the prevalence of silicosis in Australia has been low as a result of the use of appropriate occupational health and safety measures.  However, in the early 2000s silica-containing artificial stones became available in Australia and are becoming increasingly popular in the manufacture of kitchen and bathroom benchtops.

Artificial stones contain cement or a polyester resin as a bonding agent which is mixed with finely ground siliceous rock and, after mixing with the bonding agent, are moulded into slabs and heat cured. Various silica-containing materials are used including natural marble, dolomite and siliceous sand. These make up about 90% of the artificial stone. The finished product is then cut to size and polished by the benchtop supplier as required for customer specification. 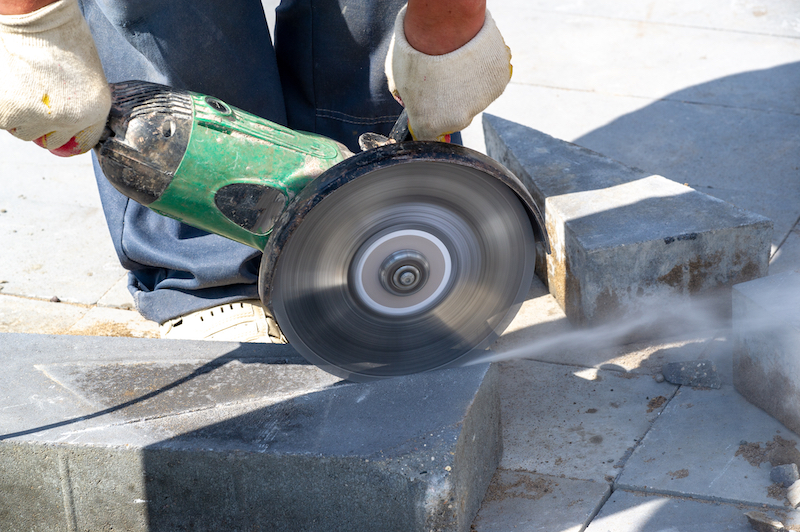 Dry stone cutting machines release large amounts of fine dust that can be inhaled, causing, in the long term silicosis and other respiratory diseases.

The creation of the individual benchtop involves the use of power tools to cut the stone slab to size followed by polishing to achieve the desired finish. This process creates a large amount of very fine silica-containing dust. This dust can be inhaled unless adequate dust suppression safety measures are undertaken in the workplace. Ideally, all cutting and polishing should be undertaken with water jet cutting and other water-based dust suppression measures.  Exhaust fans and extraction systems together with personal respiratory protection (masks) should also be used.

In the last 10-15 years a number of cases of silicosis, occurring in the artificial stone benchtop industry, have been reported and occupation medicine and respiratory physicians are now seeing an increasing number of cases. The magnitude of presentations is such that significant concern has been raised by physicians, workers’ compensation insurers and in the media.

Examination of the working conditions in the industry suggests that the use of adequate dust suppression measures has not been widely adopted leading to a significant quantity of respirable silica-containing dust in the workplace. In turn, this has resulted in an increase in the number of cases of silicosis, particularly in younger men. The risk of developing silicosis is greatest when the cutting and polishing of the artificial stone is undertaken under dry conditions, but cases have been reported in situations where cutting and polishing is done with water dust suppression. Unlike some other industries in which workers are exposed to siliceous dust, silicosis appears to occur after much shorter exposure durations than in the other more traditional occupations where there is exposure to silica-containing dust. 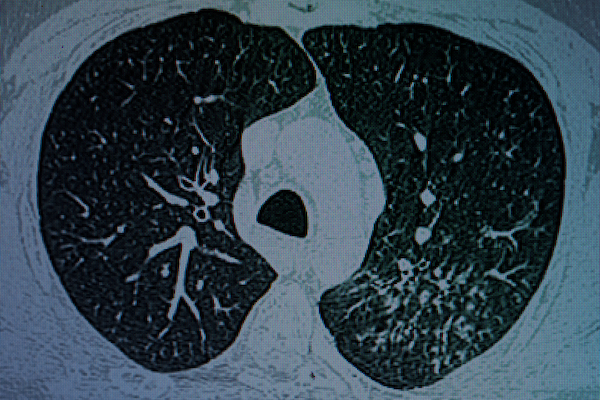 CT scan of a male with fibronodular infiltrates in the left upper lobe of the lungs.

Silicosis is an inflammatory condition of the lungs caused by the inhalation of silica-containing dusts. Initially, these inflammatory changes include small nodular changes throughout the lungs, but later lung scarring develops and is irreversible. In many cases, the scarring in the lungs may become confluent, a condition known as progressive massive fibrosis. Pulmonary hilar lymph nodes may be enlarged and show characteristic circumferential calcification producing an ‘eggshell calcification’ appearance on radiological examination. Sufferers usually present with symptoms of progressive breathlessness and cough. Chest discomfort and fatigue are also common complaints. Symptoms develop over variable periods.

Various presentations of silicosis are recognised.

Acute silicosis develops after short term exposure to high concentrations of silica-containing dusts. This exposure may be as short as a few weeks to 5 years or so.  Symptoms are usually more severe and more rapidly progressive.

Chronic simple silicosis develops over 10-30 years or more of exposure to low concentrations of silica-containing dusts over a ten-year period or more and in the past has been the most common type of silicosis.

Accelerated silicosis is similar but develops over a shorter time frame (5+ years). 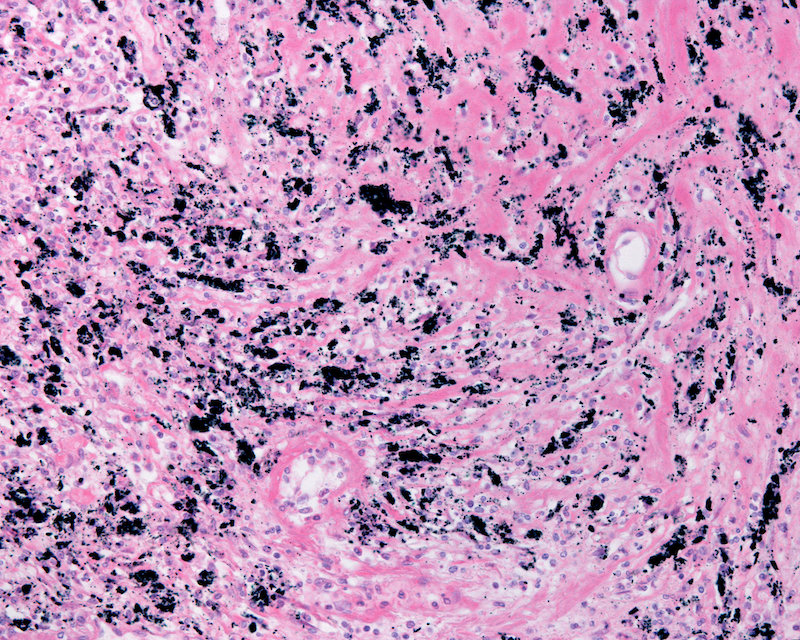 Lung scarring and fibrosis seen under the microscope of a lung histological sample.

Complicated silicos is is a term reserved for those cases where there are large amounts of lung scarring including progressive massive fibrosis and where the small nodules of simple silicosis become confluent.

Other complications may also occur such as lung cancer, tuberculosis and non-tuberculous related and fungal infection. A very rare complication is a condition known as pachymeningitis (thickening of the brain meninges caused by inflammation). These patients present with headache.

There is no cure for silicosis except in the most severe cases with advanced respiratory failure when lung transplantation may be considered. 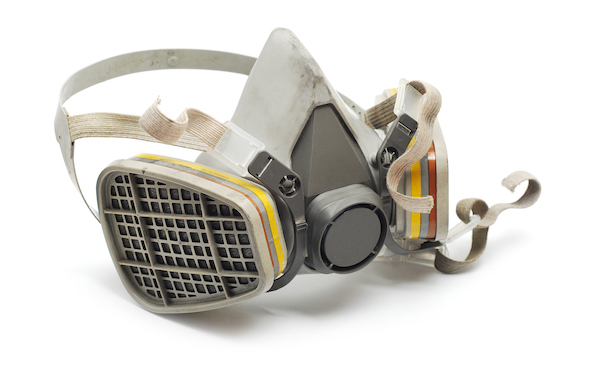 Wearing protective masks prevents the inhalation of stone dusts when operating types of machinery in the stonemasonry profession.

Prevention is the most important aspect of combatting this lung disease. This involves in use of rigorous dust suppression measures, such as cutting and polishing underwater, adequate and functional exhaust fans and the use of personal respiratory protection by individuals undertaking these activities. 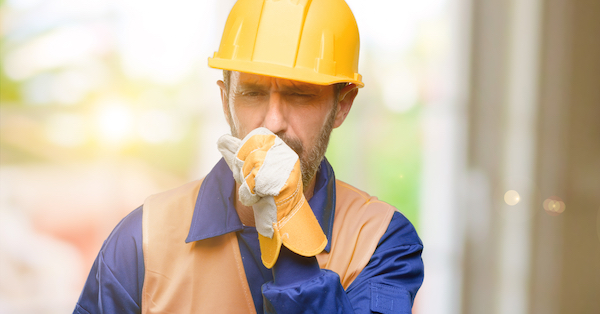 A 28-year-old male presented with a history of breathlessness. He said that it was “difficult to know” when the symptoms actually started but noticed the breathlessness one day when at work when he was walking up a flight of stairs. He consulted his General Practitioner who thought that he might have asthma and referred him to a respiratory physician for an opinion.

He gave a history that over the past ten years he had been working for a kitchen and bathroom benchtop manufacturing company. He had been involved in cutting and polishing artificial stones and, sometimes, marble and granite. The cutting was done dry but there were exhaust ports close by. Polishing was down wet. The workplace was very dusty. He said that even when walking through the factory there was always dust everywhere.

The respiratory specialist arranged for a chest x-ray and lung function tests. The chest x-ray showed a micronodular infiltrate consistent with a diagnosis of silicosis and the lung function tests showed a slight reduction in the vital capacity and diffusing capacity indicating the presence of an interstitial disorder and impairment of gas exchange. A high-resolution CT chest scan confirmed the chest x-ray findings. When reviewed by the specialist, the patient was only able to walk about 100 metres on level ground before becoming breathless and was always short of breath if he hurried or walked up hills or on stairs. He was also experiencing a regular non-productive cough.

Clinical examination revealed the presence of occasional inspiratory crackles on auscultation of the chest. A bronchoscopy and open lung biopsy was performed. The histology of the biopsy confirmed the diagnosis of silicosis. The specialist noted that there was no specific treatment for silicosis except to prevent ongoing exposure and, therefore, further potential damage to the lung. 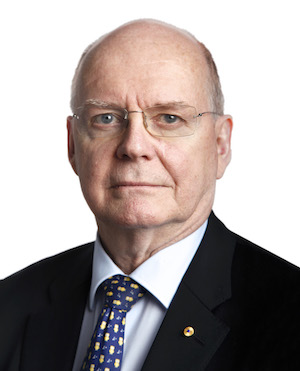 Dr Burdon is a Lex Medicus medico-legal expert and specialist in respiratory and sleep medicine with special interests in asbestosis, silicosis,  occupational asthma and lung and respiratory diseases and impairments.